Teegarden two new Earth like exoplanets has been discovered

The star is 12.5 light years away and has a mass of 0.08 solar masses and luminosity of 0.00073 of our sun. The parallax was initially measured wrong and gave it a distance of only 7.5 light years away that would be the third nearest star after Alpha Centauri and Bernard star. Teegarden is now ranked the 24th nearest star system. Observations by the ROPS survey in 2010 showed variation in the radial velocity of the star suggesting it has a planetary system.
CARMENES that stands for "Calar Alto high-Resolution search for M dwarfs with Exoearths with Near-infrared and optical Échelle Spectrographs” at the Calar Alto Observatory announced evidence of two Earth-mass exoplanets orbiting the star within its habitable zone.

The news was announced a couple of days ago on June 18, 2019. The two planets have high earth similarity index and are located within its star habitable zone. Teegarden b is located in the optimistic habitable zone and Teegarden c is in the conservative zone. No transits of the planets have yet been seen by our astronomers. But because of the cosmic geometry, any alien astronomers living on Teegarden planets could use the transit method to discover Earth as we orbiting just in the right angle from their point of view. Teegarden b has the highest chance of having temperate surface environment.  However, as the planets are orbiting a red dwarf star their orbits are tidally locked and stellar activity from the star could be dangerous for life. 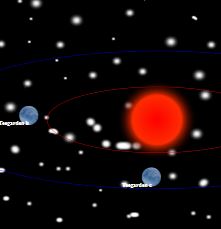 Here is a simulation of the solar system in our app here: Teegarden