The star has an Exoplanet K2-18 b in its so-called goldilocks zone. The planet that was discovered by the Kepler telescope in 2015 is 8 times more massive than Earth and has a 33 days orbit.
It is the first Super earth exoplanet in the habitable zone of its star where we have been able to discover water in its atmosphere. Water has previously been discovered on Jovians outside the habitable zone of its star. See our previous article: Atmosphere on exoplanets

The measurements were done with the Hubble telescope and were confirmed by two separate analyses by researchers at Université de Montréal and University College London (UCL) The result was published just a month ago on September 2019. This is very exciting news K2-18 b is cool enough to have liquid water and models suggest that its atmosphere has sufficient pressure that will form clouds and have rainfall just like earth. But some analysis suggests that planets this size could lack solid surface and could be more similar to Neptune than earth. It is not possible from the Hubble data to see how much water there is in the atmosphere. 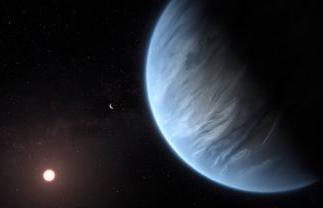 K2-18 b is now expected to be observed with the James Webb Space Telescope that will be launched and for the ARIEL space telescope which mission is to study the atmospheres of Exoplanets in great details that will be launched in 2028. These telescopes have the instruments to look for gases in the planet's atmosphere that could only be produced by living organisms. It would be hard to imagine any human-like creatures would be able to live in that environment but may be possible for microorganisms. Even if there is no sign of life. The atmosphere on K2-18 b will tell us a lot about how planets in the habitable zone are formed around red dwarf stars