Arecibo Observatory in Puerto Rico is a very large radio telescope build inside an abandoned sinkhole in May 2017 the telescope was looking for exoplanets around red dwarfs. A red dwarf is much smaller than our Sun and small earth size objects are easier to spot around small dim stars. These are so-called quiet stars its ultraviolet radiation would not strap the potential orbiting exoplanets from its life-supporting atmosphere. The stars that were examined was Ross 128, Gliese 398, Gliese 436, Wolf 359, HD 95735, BD +202465, and K2-18). The telescope detected a new kind of signal never seen before from Ross 128, 11 light-years from Earth. The signal lasted for around 10 min and was in frequencies between 4.6 and 4.8 GHz. The uniqueness of this signal gave rise to some speculation it could be alien in origin.

The Arecibo scientists worked with researchers from the SETI Institute reach and ruled out that the signal is from an alien civilization. It was probably coming from our own satellites It would explain why the signals have the same frequencies interval as our satellites, and Ross 128 was close to the celestial equator where many of the satellites are stationed. Astronomers call this the Weird! signal in honor of the Wow! signal from 1977 that still remains as one of the strongest candidates for alien transmission. The PHL also conducted a survey with almost 800 participants to find out what people thought was causing the Weird! Signal. The Weird! Signal was never heard of again.

Here is the press release at PHL about the Weird! Signal /press-releases/theweirdsignal 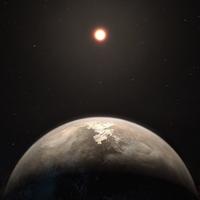 An exoplanet orbiting Ross 128 was discovered in July 2017 by the HARPS instrument at the La Silla Observatory in Chile using the radial velocity method. Its existence was confirmed on 15 November 2017 and was given the name Ross 128 b. The planet is in the habitable zone of its star in the so-called Goldilocks zone. Ross 128 b is one the best candidate for a potentially habitable exoplanet confirmed so far. It has the mass 1.35 of Earth. If it has an atmosphere and if it has the right chemical balance for life it could be an earth 2.0. That is not proven it could have the same condition as Venus depending on the greenhouse effect. Ross 128 b is just like Trappist-1 planets and Proxima b tidally locked in its orbit around the star. Eternal night on one side and eternal day on one side. Its year is only 9.9 days long. As Ross 128 is twice the age of our Sun the potential aliens of that planet would have billions of years more than us to evolve their civilization.