Researchers have taken a picture of a black hole

For the first time, researchers have managed to take a picture of a black hole. The sensational news was announced at press conferences sent simultaneously from six different places in the world. The discovery was made by the Event Horizon Telescope ETH that consist of a global network of radio telescopes that combined data from eight stations located on different places in the world with help of a technique called very long baseline Interferometry. The black hole is 6.5 billion times the mass of the sun. It is located 55 million light-years from Earth in the constellation Virgo at the center of supergiant elliptical galaxy Messier 87 also known as Virgo A or NGC 4486. 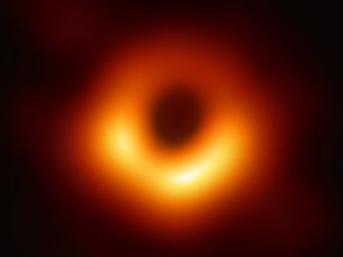 Black holes were first discovered as a theoretical solution in the theory of general relativity published by Albert Einstein in 1915. General relativity describes gravity as a geometric property of space and time. Heavy objects like our Earth will curve space-time with its mass. And a black hole is such massive object that at a point nothing can escape its gravitational pull not even light this is called the event horizon. If you would approach the event horizon of the black hole some bizarre things would happen. An outside observer watching you fall into the hole will see your time slow down until you stop completely.

Stephen Hawking studied black holes theoretically. In empty space, quantum fluctuations occur. A particle and its antimatter particle can arise from nothing to later collide and become annihilated. It may happen that the anti-particle is sucked into the black hole, while the other particle succeeds in leaving the event horizon. This is a violation of the conservation of energy an explanation could be that the particles time travel in the time dimension to later collide. That would mean that black holes would evaporate after a long time. This is not proven. Even if we have known about and been fascinated by black holes a long time. We have never actually seen a black hole until now. How awesome is that!