The hunt for Planet X

When I was a little kid, I was very interested in the planets of our solar system, at that time no exoplanets had been discovered yet. I had memorized the order and the name of the nine planets. Mercury, Venus, Tellus, Mars, Jupiter, Saturn, Uranus, Neptune and Pluto.

Wait now there are only eight planets in our solar system. Is what I learned as a kid no longer correct? Yes Pluto is no longer considered a planet by science it is a dwarf planet. But astronomers still thinks there is a ninth planet out there somewhere.

Urbain Le Verrier was an nineteenth-century mathematician and physicist that with help of Newtonian mechanics made calculations on Uranus orbit to predict the position of the undiscovered planet Neptune. Later observations of Neptune's orbit led to the speculations that it is another undiscovered planet outside Neptune. 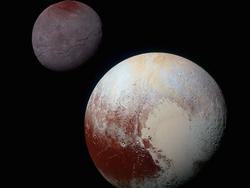 Percival Lowell was a businessman. He founded the Lowell Observatory in flagstaff, Arizona in the beginning of the twentieth century. He started a project of finding the mysterious ninth planet that was given the code name Planet X. In 1930 the planet (sorry the dwarf planet) Pluto was discovered by Clyde Tombaugh. From the outside of the Neptune orbit and 20 AU (1 AU is the distance between Earth and Sun) out in space is the region called the Kuiper Belt. Kuiper Belt is an asteroid belt that probably has over 70 000 object with a diameter of 100 kilometers. Outside this belt the whole solar system is surrounded by Oort's cloud the origin of comets. Pluto was the first Kuiper belt object to be discovered. Pluto has a diameter 2 377 kilometers comparing with the moon 3 474 kilometers and the smallest planet Mercury has an diameter of 4 879 km. For almost 50 years Pluto was thought to be larger than Mercury, it was first when detecting Pluto's moon Charon in 1978 that it was possible to measure Pluto's mass.

in 1987 the Astronomer David Jewitt encouraged Jane Luu that was graduate student at the time to look for objects outside Pluto with the words "If we don't, nobody will." They discovered after five years work in 1992 several larger object in the Kuiper Belt that confirmed that there is an asteroid belt in that region. In 2003 the dwarf planet Sedna was discovered  at 80 AU three times as far as Neptune from Sun. Sedna has a diameter of 995 km. In 2005 Eris (first know as Xena) was discovered Eris has a diameter of  2 326 km which is almost the same size as Pluto, but Eris is more massive than Pluto and many astronomers considered Eris as the tenth planet in our solar system. International Astronomical Union come to another conclusion in 2006 and downgraded Pluto to not be an planet.

Estimates suggest that it will be hundreds of dwarf planets in the Kuiper belt. The objects found so far has strange orbits. Mathematical models has shown that these orbits could be explained if there is an undiscovered planet which gravity is effecting these objects. The hypothetical planet that have a mass about 10 times that of Earth and orbit about 600 AU from Sun. The planet is thought to be gaseous or it could be rocky a so called super earth. It may take between 10 000 and 20 000 years for the planet to make one full orbit around the Sun.

The search for Planet X has intensified and has led to more recent discoveries that give more proof that the planet actually is out there. One of the big announcements in astronomy this year October 2018 was the discovery of the dwarf planet nicknamed goblin. Goblin is as far out as 80 AU from the Sun but when it is at the most distant point in the orbit, it will be 2 300 AU from the Sun, which would be what was predicted if Planet X is out there. Goblin is a smaller object 300 km diameter. Also recently a new Object was announced on 17 december 2018 under the nickname Farout. The object is 120 AU from the Sun. The search for Planet X continues and hopefully our solar system soon has nine Planets again.